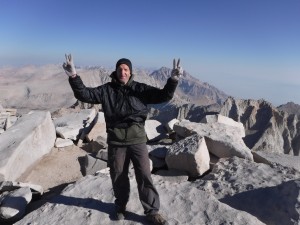 Byron Johnson is participating in the 2017 Dream Mountains Kilimanjaro Trek, in support of Habitat for Humanity.

I am very excited about doing this adventure. I love doing things that challenge me physically and mentally.

Potential Habitat for Humanity partner families are low-income, working families living in inadequate housing and who are willing to put in 500 hours of "sweat equity." Habitat for Humanity does not compete with other builders as Habitat services a clientele who could never afford to buy a house or qualify for a conventional mortgage. Houses are built by volunteers, skilled trades people and journeymen who are caring individuals, enthusiastic about giving a family "a hand up, not a hand out". Manufacturers and distributors in the construction industry donate their products to help build houses and reduce costs. The real miracle of Habitat is that it not only changes the lives of the families receiving the house, but it provides a tremendous sense of purpose and fulfillment for many volunteers and supporters.

I have been thinking for several years about the possibility of climbing Mt. Kilimanjaro but always thought of doing it in a few years. This summer’s hike of the John Muir Trail in California with the summiting of Mt. Whitney (4421m) was, to my mind, a test toward climbing Kilimanjaro or similar climb. Then, I found out about the Dream Mountains excursion and was so impressed by its program that I had to sign-on. I know the trek up Kilimanjaro will be an amazing experience. Please support me by supporting Habitat for Humanity.